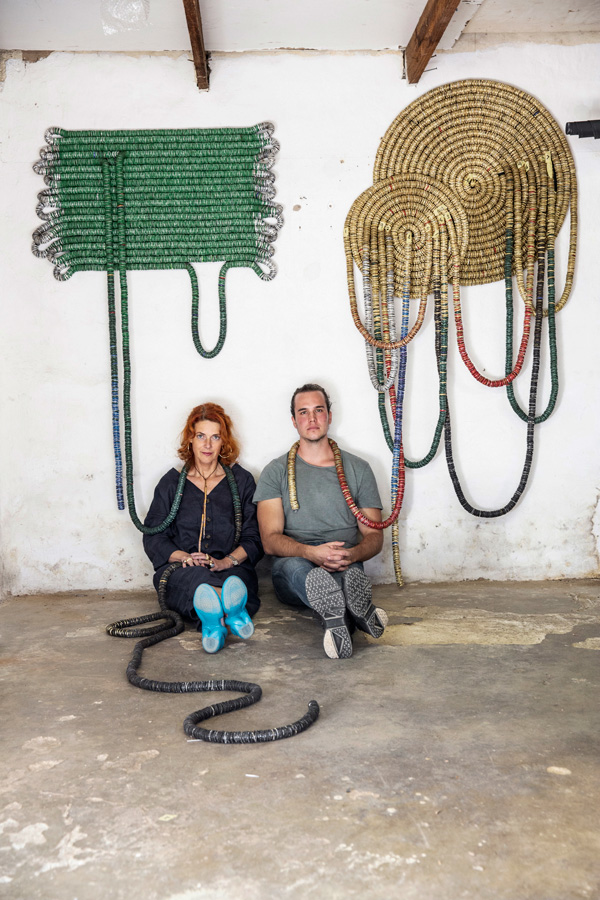 Johannesburg. Never before in my life have I seen so many fences and walls, usually topped by electric fences, and so few pedestrians. Strangely enough, there are very few parked cars. Of course I had heard that Johannesburg is plagued by high crime and serious socio-political problems. But, as I shall find out today, it is something quite different meeting people who grew up here and use art to discuss life in this city.

I am paying a visit to Chris Soal, 24, one of THE upcoming artists, who represent the new South Africa (24 years after the end of Apartheid) in their work. The course of his early career progressed extremely fast. While still a student, he was nominated as a finalist for a few awards, and then only three months after graduating from his Bachelor of Fine Arts (Honours) degree at The University of the Witwatersrand in Johannesburg, he was awarded the first prize for the PPC Imaginarium Award, in 2018. In the same year, recognition from international foundations enabled him to participate in not one, but two artist residence programmes. This was followed by group and solo exhibitions in institutions and galleries and his work being placed in important collections.

His studio is set up in his parents’ garage – fortunately still quite down-to-earth.

Looking into the studio

The house is situated in a middle-class residential area. As before: No pedestrians, no parked cars. You ring the bell, the gate opens, you drive onto the property, and the gate closes. I immediately remember the first rule of conduct given to me at my guest house and which will hound me, as if I’m being brain-washed, the whole weekend: “Stay behind the gate!”

The slightly uncomfortable feeling is dispelled the moment Chris, with a big smile on this face, comes out of the house and invites me in for coffee and biscuits. Many of the walls show some of his unusual wall sculptures. Surrounded by rather more conventional furnishings and décor, they appear almost a little surreal, but demonstrate quite clearly the obvious pride of his parents in the success of their son.

We then move on to where he works. Immediately, my attention is caught by his latest bottle top works. I cannot immediately see what type of material he has used. The spiral-shaped cords make me think more of basketwork. The forms and colours – particularly the gold, silver and dark green – convey something typically African, which reminds me of traditional garments, jewellery or precious ornaments. Yet bottle tops of beer bottles?

Chris draws my attention to the sculpture which won him the art award and which he has just bought back from the buyer for more than two and a half times the purchase price. “That was a bit silly of me”, he admits, smiling. “But who would have thought that the work would become of such a high sentimental value to me?”

It is the construction of a scuffed, deflated football, made from cement, skewered by a bent steel rod. “This sculpture reflects a lot that has to do with Johannesburg as well as South Africa. Here, soccer is played largely on private properties, not in public areas. Because of the barbed wire fences it usually does not take long until the ball looks like this one. This is an experience almost all children living and growing up in Johannesburg share. At the same time, I refer to the debate surrounding the FIFA 2010 World Cup. Asking, of what benefit was it actually to the country, what is happening with the stadiums which meanwhile are starting to represent something of an almost monumental absence?”, Chris says explaining the backstory.

Imposed structure to the detriment of the members [Deflated], (2018)

What role does the specific materials in this piece, “Deflated” play?

Chris: The material choices, and similarly with all my work, is very important. I play with it, trying to present it in other contexts and forms than we (as viewers) know it. Cement is a hard, static material which is found mainly in architectural constructions …. the use, therefore, is also a reference to the often dilapidated concrete skyscrapers which characterise the Johannesburg central cityscape. In this sculpture, however, the material suddenly looks like something soft and mobile.

Can such allusions then also be found in your bottle top works? What gave you this idea?

Chris: The starting point was again taking a conscious look at the city. Downtown, in particular, has a massive litter and waste removal problem. Many things lie in the streets and it’s not uncommon to see discarded beer bottle caps lining the pavements or pressed into the tar surface of the road. Initially, it was their form that inspired me. A single beer cap bent in half, reminded me of the ridges or “teeth” of a sea shell like on the underside of a cowrie. I collected them from bars and drinking holes in the city until my studio consisted almost entirely of bottle tops and I started to experiment with them. Against the backdrop of the questions as to what the materials say about our life and society, continually new variations emerged – evolving groups of sculptures.

Are you able to elaborate on this using the example of the bottle tops?

Chris: Sure. Of course. Starting with the question as to what histories and information is contained in a waste product of the beer consumption, I visited a manufacturing plant of bottle tops and looked at the industrial manufacturing process. Before punching the caps, the sheets with the various labelled prints fascinated me just as much as the waste products left after the punching process. When the print was changed, there were bits of unused sheets with overlayed designs from the different logos, a byproduct of cleaning the printing presses. They looked like textiles of African patterns (such as the local Shweshwe cloth), while the waste of the processed sheets looked like punched out gold. Suddenly this made me think of two of our major production industries: The textile industry and, of course, gold mining, without which the city of Johannesburg would never have been built. Two production branches, where predominantly women are employed in textiles, whereas in gold mining men play a major role. These two industries, unfortunately, are in great trouble. So then, by and by, I discovered essential characteristics of our social image in an industrial product like the bottle top. Characteristics which – within the context of an artistic process – ultimately found their reflection in diverse sculptural forms. Similarly, an engaging conversation between industry and culture was being played out in the works.

There is so much regarding the question about what materials can say about the society we inhabit. To what extent do your sculptures reflect questions of human existence and experience?

Chris: Firstly, these questions are reflected in the repetition of the same type of objects. When viewed as a whole, the individual objects appear to lose their importance. However, each object is of great importance for the creation of the whole picture. I use the repetition of the same type of object as a means to reflect the interdependence of the individual and the collective. And secondly, space, time and light – important components of human life – also find their place in my sculptures.

The incidence of light and the movement of the viewer in the room cause two completely different perceptions. I therefore incorporate known patterns of perception while I develop my works. Ultimately, the objects I am using also embody relics and traces of a cultural past and reflect the change of values during the course of time.

In many cases, these thoughts also apply to your toothpick works. But I expect that these are not relics of the past?

Chris: Oh no [laughs]! All brand new. At the moment, there even is a supply bottleneck. There are no unwrapped toothpicks to be found in the whole of South Africa. I’m not joking! The supplies are on their way, but still delayed in Durban harbour due to strikes.

A look at the mass of the processed toothpicks leaves no doubt about this statement. … I am looking at the work from a bit further back. It is amazing. Once again, I perceive the material as something different from what it is. Again, form and colour lead me astray. The large-scale sculptures look like cuddly soft animal fur, the smaller ones like sharp corals. “What thoughts surround the making of these works?”, I ask.

Picture left: “Lament (We thought the good times would never end)” 2019 (courtesy the artist and WHATIFTHEWORLD Gallery). On the right: Views of toothpick works in the studio.

Chris: Again these were questions about collective lived experience. In this case, our complicated relationship to nature: where we simultaneously depend on nature and, often out of fear or greed, dominate it. The former is under-emphasised, and the latter is exaggerated to a very dangerous level.

Final question: Because of the intense labour of these works, are you not worried that at some stage you will be sick to death of bottle tops and toothpicks?

Chris: Luckily not yet. The reasons are two-fold: I always work in a team. So there is no lack of variety and input from many people, and you can be sure of numerous new ideas influencing the creation of the works. And, I always work on several projects at the same time. I like to combine my central materials with each other or with something that I suddenly come across and that inspires me to step out and try something new. The evolution of new interpretations helps prevent boredom [he adds with a twinkling in his eye].

Picture left: But I still haven’t found what I’m looking for (2019), Picture right: Climb into someone else’s skin and walk around in it (2018)

Looking back, I wonder whether Chris Soal’s central question regarding what materials tell us about our society and human life, does not also contain an analysis of the concept of sculpture. He shows that any material might become sculpture and so supports the idea of the Objet trouvé* conceived by the representatives of Avantgarde at the beginning of the 20th century. And he enables the viewer to experience another important characteristic of the sculpture because of the intrigue caused both by the material and the form. He challenges us to approach the sculpture from various perspectives by moving around it. This movement is the precondition for the perception of its three-dimensionality, which is always dependent on a three-dimensional space. Last but not least, the plethora of the various interpretations which develop within his bodies of work may be interpreted as a mirror of the unpredictable process of development in sculpting.

In short, characteristics of the Objet trouvé here meet fundamental properties of sculpting and reflect collective and philosophical questions of the 21st century.

Or, to put it boldly and simply: Objet trouvé travels in time. …

*a found object is treated like a work of art

And to see his current exhibition: https://www.whatiftheworld.com/exhibition/field-of-vision/

To spy on the artist: https://www.instagram.com/chris_soal_.pdf.jpg.mp4.art/ 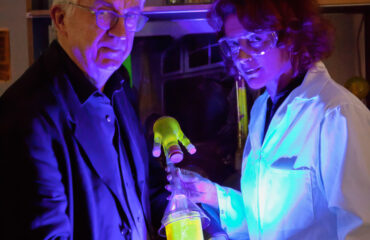