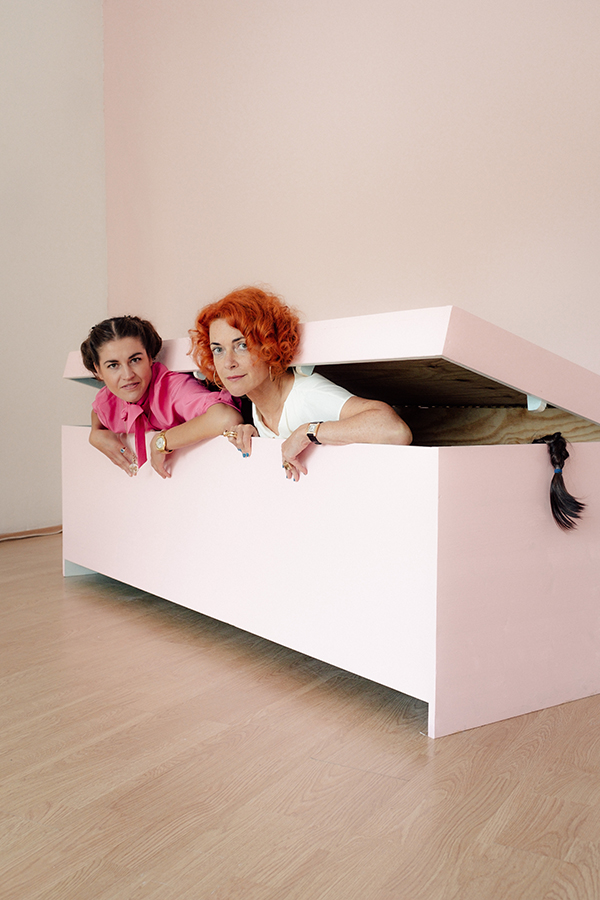 Bad-Gastein. Is that an urn in the window and a coffin at the back of the shop? Nonsense, it’s probably simply a vase and a trunk. After all, an exhibition is about to be opened within the context of the sommer.frische.kunst art festival. While I am still shaking my head at my own thoughts, I pause, in a mixture of feeling dumbfounded and astonished, when I hear the opening speech: “Xenia Lesniewski created a room installation here that moves between a concept store, funeral parlour and travel agency […].” Is that possible? – My past just flitted through my mind at high speed and links up with the here and now. For those, who didn’t know this yet: Before I got involved in art, I was an undertaker….

It is obvious that I must talk to this artist. A few days later we meet at INSTANT SOLUTIONS-Store, which sits unobtrusively between cafés, hotels and a genuine Concept Store on Kaiser-Wilhelm-Promenade.

At first sight, the entire interior looks like a beauty salon, with pink being the predominant colour in both rooms which are connected by an open semi-circular arch. Not only are the walls painted pink. The paintings, cursive neon signage, wall brackets for the presentation of canned drinks, the inside fountain, the “trunk” and last, but not least, Xenia’s blouse use lots of different shades of this colour, thus forming a perfect corporate design. The perfect staging!

Nothing points obviously to an art exhibition, let alone to today’s ever so topical subject of suppression: “What motivates a young artist to get involved – of all things – with the subject of death?” is therefore my first question.

Xenia: The subject has been on my mind for a long time, but I always thought that it was too big for an artistic examination. Or, to put it differently, to deal with fundamental themes like life and death on a purely visual level. However, when I got an invitation last year, to develop a room installation in the first district in Vienna in an art room disguised as a pop-up showroom, the sacral architecture of the room, its position between a boutique and a hair salon, and, ultimately the morbid atmosphere that surrounds the city of Vienna, motivated me to conceptually approach the subject in its complexity. The similar conditions here in Bad Gastein were therefore ideal for a Zweitfiliale (branch).

E.B.: So therefore the room and its surroundings gave the impulse for the first realization. But what was it before that gave you the reason for the involvement? Was it the big questions about life and death, which are essentially ever-present in art, or was there a death in the family or amongst your friends, that confronted you with the subject of funerals and perhaps lead you there?

Xenia: I accompanied my gran while she was dying. I lived with her for two months and helped organise the funeral. But I don’t think that this was the trigger.

E.B.: Hm. The grief counsellor in me says something else. You would probably not have got the idea to involve yourself in such exact detail with funeral options.

Xenia: Perhaps you are right. Just a minute – I just remember that for a while I lived above a funeral parlour. … [laughs].

E.B.: I see! Well, that’s settled then. How did you approach the research?

Xenia: At the beginning, I wanted to get familiar with the history of funeral culture. I therefore started with a visit to the funeral museum at the central cemetery in Vienna. After that, I had a look at a comparatively recently opened coffin studio in Vienna, which makes it possible for the families to introduce new ideas to the design of the coffin and also have it made. I then researched extensively mostly in America, where there is a much larger range of funeral options than here. Whether it is an ash picture, space funeral, the transformation into a coral reef, composting …. almost everything is possible. INSTANT SOLUTIONS, after all [chuckles]. When developing my concept it was extremely important to me that it was based on well founded research. Although the implementation is ultimately humorous, I absolutely wanted to avoid that one could get the impression that I approached this superficially and am ridiculing the subject.

In conversation with Xenia Lesniewski.

E.B.: Just like in Vienna, nothing here indicates an art room. Why?

Xenia: It is vitally important to me to break down inhibition thresholds in matters of art and to establish a relevance between reality and art in my exhibitions. With the positive, pink shop ambience I produced an alternative and encourage people outside of art circles to simply come in and have a look.

E.B.: … and, with the next step, lead them to a tabu subject, that one wants to avoid thinking about as long as possible. In a very subtle manner you encourage them to engage with death, daring them to plan their last journey and offer the most bizarre objects. One of my favourites is HEAVEN-UP. What is that all about?

Xenia: There is HEAVEN-UP and BURNING-FAST. Both of them, like almost all the objects, have multiple functions. Before and after death. I use both drinks to deal with the subject of euthanasia. HEAVEN-UP massively increases the heart rate and causes death just as quickly as BURNING-FAST, which dehydrates the body and therefore does not only bring about death, but needs less energy for the cremation. Once the person has died, both cans can be transformed into an electric candle or a water dispenser for an indoor fountain, for the purpose of remembrance for the family. The coffin is also flexible, it can be used as a trunk during the lifetime and the urn can be used as an everyday object, for instance as a vase or cookie jar.

Examples from the catalogue of INSTANT SOLUTIONS.

E.B.: Everything is included in the complete range of your Concept Store, and also summarised in an unusually entertaining catalogue. In addition to the objects, it also contains the weirdest funeral options advertised in a striking lifestyle aesthetic. The respective advertisements, including advertising slogans, play with the themes of our time. Wellness hype and striving for luxury are covered as much as a consideration for the climate and the environment. The prices are presumably on request?

Xenia: [smiles mischievously] Sure! Of course, that is also part of it. Although the project mainly hopes to aim at a change in perspective, it also contains a form of criticism of capitalism. The funeral business is an independent, commercial market which does not offer the full range for everybody.

E.B.: That is true. Add to this an extreme loss of our undertaking culture, which then was the reason for me to stop or, rather, give up. I thank you very much for this unexpected flashback. So, what are your next plans?

Xenia: My doomsday bar APOCALYPSO is going to be opened shortly within the context of the Salzkammergut Festwochen in Gmunden………… 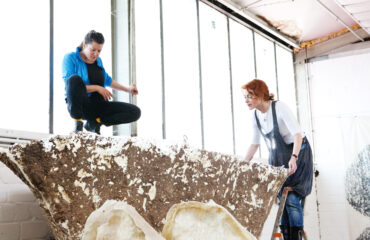 Claudia Mann – The search for the origin of sculpture 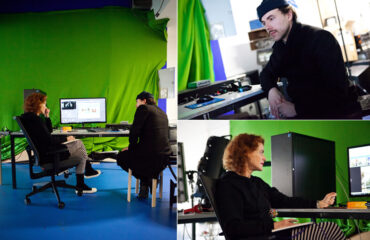 Manuel Graf – In the footsteps of animation

Manuela Knaut – The beauty of the overlooked