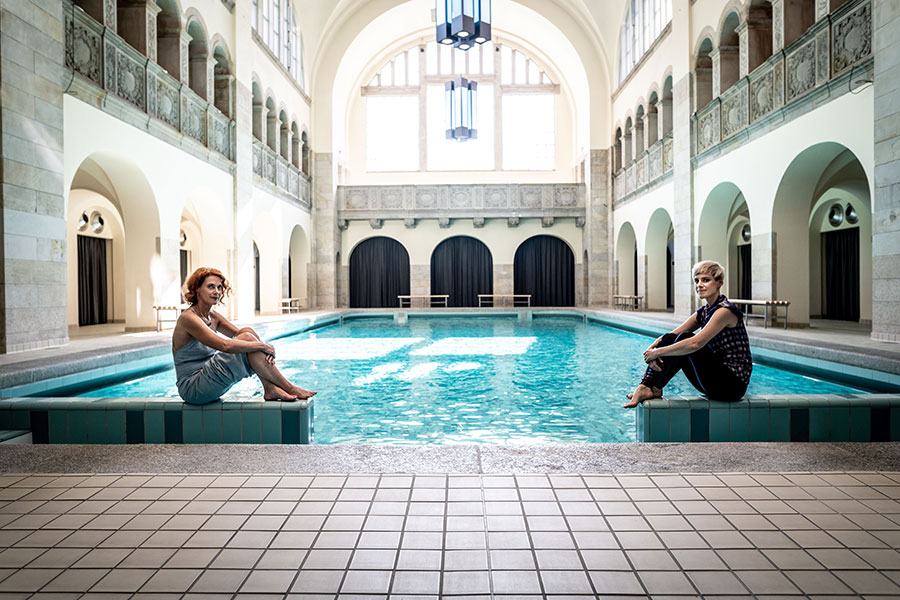 Berlin, Prenzlauer Berg. Oderberger Straße municipal swimming pool. This is the place where Johanna Keimeyer staged her spectacular dance performance, much talked about in the media, for the reopening of the renovated building. It is also the location where photographs of her series Pool Around, are installed throughout the entire complex. Here we start our tour through Berlin, a tour through the artist’s multimedia work . . .

In the wellness area of this fantastically beautiful, historical city bath, we viewed the artist’s underwater pictures. These are self-portraits taken in over 75 hotel pools around the world over a period of eight years. The limits of weightlessness seem to have been overcome by dancing elegance.

“It actually took infinite trials and constant corrections to achieve this appearance of lightness,” she tells me. “The dives were very intensive every time, but unknowingly, I was trained as a free-diving expert” she adds with a laugh. “When I became aware of my abilities, I just took part in the German Diving Championships, and after holding the air for 4:34 minutes, I got the best result for Berlin,” she casually tells the story of her chance diving career.

During this time, above all, she discovered her fascination for the underwater world. “”For me, it became a magical parallel world in which I felt that I could move beyond emotional space and time and emotionally out of my body…in the pictures, therefore, I no longer see myself as an artist, but a fictional character.” A central idea which has found further interpretations. But more on that later.

Examples of  Pool around me in Stadtbad Oderberger Straße

The threat to the underwater world caused by plastic waste, led her to recycling art. To confront this ecological problem in an artistic way, she turned sloppily discarded plastic bottles into creatively designed lighting objects. Examples of these, as well as her recently finished sculpture Drowning Trashure, will be exhibited in the Window of Modern Art at Berlin Art Week, and this evening, as a complete installation in Hometown Berlin, our next destination …

Right next to Bahnhof Zoo is the huge exhibition space, frequently used as an open-air studio by street art and urban art artists. This is where Johanna Keimeyer worked for a month on her new sculpture, which has already been prominently placed in the, so-called, Dome for World Clean-up Day. It is a gigantic shell, poked by colorful plastic garbage.

“It’s not quite finished yet. I still have to align the lighting objects properly.” She is already standing on the ladder and working on shaping it. Meanwhile, she talks about the development and implementation of the idea.

“It’s an ironic allusion to the fact that pearl divers find colorful plastic waste in the sea instead of shimmering shells. In search of the most ‘decorative’ garbage possible, I first rummaged the landfills and then the Spree River with a kayak, before searching for a template for the shell. I finally found what I was looking for in the theatre.”

Installation in Hometown Berlin for the World Clean Up Day

Her luminous objects, which have attracted international attention and can be found in important design collections, form a kind of a frame, staging the sculpture and supporting the content of the installation. Imaginative filigree forms play around the unassuming lights and make the individual pieces look like modern interpretations of a chandelier.

In her apartment in Kreuzberg, the third and final stage of our tour, she talks about her artistic career. “My mother is a painter and art historian. Painting and designing were therefore a natural part of our everyday lives. So I decided, as a matter of fact, for a creative education. After graduating from high school, I first trained as a carpenter and upholsterer at Vitra Design and then studied interdisciplinary product and fashion design, as well as digital media, at UdK Berlin, in Tokyo, and at the Rhode Island School of Design and MIT in the USA.”

It doesn’t surprise me that an original Verner Panton inhabitable landscape determines the centre of her apartment. “I was able to get it for a reasonable price because the components had to be re-upholstered – of course I made it myself,” she proudly comments on the purchase of this decorative and super-cheerful gem.

Some of her underwater pictures also hang on the walls: “The pictures were taken during your studies. You presented them in very elaborate shows, with video and sound performances. Why this additional staging?” I ask now. “I wanted to create a form of installation that challenged the viewer to emotionally engage with my own work. Ultimately to encourage him to acknowledge his own emotions.”

POOL AROUND ME performance at Rooftop Gallery by Farmani, Bangkok from Johanna Keimeyer on Vimeo.

This was also the artist’s intention behind her largest project to date, BREATH ing HEART, made for Art Basel in 2017. It was the architecture, the interior of a historic water filter that inspired her to project it onto the interior of the human body. In the vault, she installed a walk-in heart, 10 metres in diameter, on an area of 1,600 square metres. By means of oversized artificial alveoli, vein-like light installations, spatially wandering sounds of music, heartbeat and breath, as well as scent animations, the visitor was invited to immerse themselves in their own interior.

“I wanted to give people the experience of ‘walking through’ their own hearts and being able to feel themselves. And that really worked. The visitors took up the challenge,” she says with glowing eyes.

This year’s video performance The Face Within, staged at the Uferstudios in Berlin, is also marked by strong emotions. We’re watching the trailer.

Johanna Keimeyer sits on the stage in front of a live audience. She is surrounded by her own projection of clustered video screens and speaks to herself? “No. I articulate and visualise the thoughts and feelings that I perceive within myself and bring them out, or rather, let them flow out of my body.” “As a kind of self-liberation?” I ask. “No, that’s a lesser point. Basically, I am concerned with the question of what remains after we strip off the superficialities of our self. Letting go is something very important to me. Feelings must be allowed to leave the body. In my opinion, this is the only way to move forward to the essence of our own personality so that we ultimately align ourselves to our own life. With my public deliverance, I wanted – as with my productions of underwater pictures – to let the audience feel this guiding principle.”

A look at the audience reveals that the artist is not only bringing herself to the limit, but obviously also pushing her to the limits of the achievable. With a forceful presence, she dominates the scenario and once again creates an almost magical atmosphere after BREATH ing HEART.

Overall, it is apparent that the content of her installations is marked by borderline experiences with which she challenges the viewer. But above all, the particular atmospheric framework is of utmost importance for her statements, creating parallel worlds through perfectly elaborated, interdisciplinary interaction of various media. Parallel worlds that invite the viewer to let go, to immerse oneself in the inner self, and in this way, access our own personality.

Multimedia once not as a means of self-expression, but self-awareness …

More information about the artist 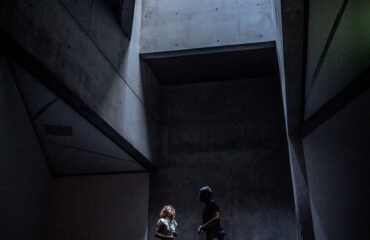 Mischa Kuball – Irritation as a concept 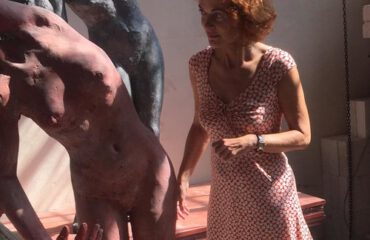 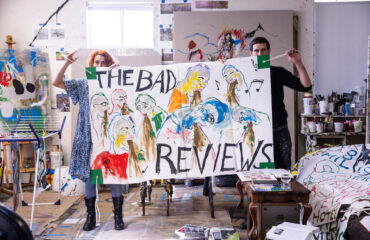