With Philipp Humm in the cinema hall with Angel on Cross, oil painting, in the background

Faust as Gesamtkunstwerk of the 21st century?

London, film premiere of The Last Faust. Both the trailer and even just a brief look at Philipp Humm’s Gesamtkunstwerk*, his total work of art (graphics, photography, oil painting and sculpture) which now comprises one hundred and fifty works, astonished me beyond belief. Yet what I see today in the cinema hall and will see in his studio tomorrow is absolutely beyond my expectations. A fascinating mix of surreal, bizarre, comical yet also oppressively visionary images draws me directly into a cinematic future of the world. A world, where artificial intelligence has taken control over planet Earth …

*Description according to the press release

Philipp Humm’s interpretation of Goethe’s Faust I and II gives me the shivers. Even those who have not read the epic usually know about the essential core of the epic, have heard of Dr Faust, who, driven by greed and ambition, sells his soul to the devil Mephisto and, as expected, ends tragically.

But how did Humm succeed in producing a classic work of literature from the late 18th and early 19th century in such a way that the rather more heavy fare is visually perceived as a piece of popular culture and its content in its timelessness.

To answer this question, I visit Philipp Humm in his studio situated in his home, a beautifully modified, typical London townhouse.

On entering the living area, I am immediately wide awake, despite the early hour (8 a.m. after the launch party). Or should I rather call it a show room? Here, a staggering selection of the various Faust works is curated to perfection. There is a lot I recognise from the film.

The questions bubbling up spontaneously are quickly thwarted. “In order to understand the whole in its logic, we should perhaps rather start in my studio upstairs”, Philipp Humm suggests. No sooner said than done. We go upstairs.

This room, too, is perfect. Everything in its place. It is so tidy that I ask him whether any work was still done here. “Yes,” Humm replies, smiling. “I also keep the room so clean because we have a vacuum-cleaner dog which laps up everything. And that includes oil paints!”

That makes sense. The terms logic and order lead me to questions about the very special vita of the artist. Until 2015, Humm was a successful manger, working as a CEO for large technology corporations like Vodafone, T-Mobile and Amazon.

What gave him the idea so terminate such a career and switch to becoming an artist?

Humm: The idea had been lying dormant in me for a long time. From early childhood my two talents showed. One was mathematics, the other art. After the matriculation I made the decision to become an artist. Unfortunately I did not have the application periods of the Kunsthochschule Berlin on my radar so that I had to compile a portfolio, consisting of work examples from all sorts of different media. This, as expected, went wrong. I did not want to waste any time and therefore devoted myself to photography, which took me into advertising, then studied marketing and quickly made a career in business administration. At the same time I became a father to three children, leaving no time for anything artistic. After my children had grown up and I had moved to London for professional reasons, I quickly noticed how strongly the second soul dwelled in me. I started to paint again – thirty to forty hours a week – in addition to my work. I quickly became aware that I had to make a decision in order to pursue the matter seriously. I thought of my father, who is now ninety, and followed his example. ‘There is still enough time’, I thought. So I ultimately decided in favour of art and studied Painting and Sculpting from Life at the London Fine Arts Studios and the Florence Academy of Art.

A big step! And how did you ultimately get the idea of Faust?

Humm: Essentially, I want to tell a story with my art. That is why my paintings and sculptures were always figurative, often also characterised by symbolism. There were two sources, which ultimately were the decicivse factors that inspired me to reinterpret a classical work. On the one hand there were the paintings of Paula Rego, who frequently starts her paintings by creating a Mise en Scène, thus creating her own reference before she starts painting. On the other hand, there was an exhibition of Dalíi, in which his interpretation of Dante’s Divine Comedy was presented. I thought that was pure genius. Being German, I wanted to work on a German subject. I immediately thought of Faust although I have to confess that I only knew Faust I. I therefore then read Faust I and II and suddenly felt the works had been written for the 21st century and Goethe’s topic had been waiting for me.

Without wanting to go into too much detail now, I have a question to the background. Goethe lived in the Age of Enlightenment and the Industrial Revolution. We live in the age of the digital revolution. Both in the original works and your interpretation of the influence of the progress of technology on the human thinking and acting plays the crucial role. Professionally, you were right in the centre of high-end technology. Was one of the reasons for giving up your job the fact that you questioned your thinking and acting within this system?

Humm: Well, the answer may be found at the latest in the scene, where Faust holds the likeness of my head in his hands …. [smiles knowingly].

Film still: Zealous und Genius: „Two souls live in me, alas, Irreconcilable with one another“ Faust

Right, it’s self-explanatory. To get back to the work: In what sequence was the whole created?

Humm: Having studied the original, I transported the scenes most important to me into a new narrative. I then drew a storyboard for the respective thirty seven scenes, which I first used as a template for my illustrative pencil drawings, before I proceeded with the photographic production.

[The kernel of the brute …] Sketch, pencil drawing and photograph of Apparition: “So it’s you who was the poodle!“ “And what’s your name?” Faust

“Where did these references come from? Did you use a digital template?”

Humm: No, by hand. Fortunately, I can think very visually. I used the actors, whom I connected with their respective parts, as models only for the faces. As, for instance, Anna Nicole Smith for the angel or Christoph Waltz for Faust.

I alternatively look at the drawings and the photographs. Hard to imagine that the details of the drawings were often implemented one to one. “And from the start, the film was conceived as the grand finale of the entire work”, I now ask.

Humm: No. It was not planned at all. I had only planned to create a staging with the actors which I intended to use as a reference for my oil paintings and water colours. However, during that time the idea emerged to film a ‘Making-of’ as a documentary. In order to animate the finished stills, we asked the actors to speak a sentence from Faust and quickly realised how suited to film this material was. So the idea took its course.

I summarise up to here: Sketch book, graphic drawings, photography, film. We now go to look at the water colours and oil paintings. Amongst them, there are known sequences of sets from Faust, but overall in a freer interpretation. The colours are expressive, the motifs appear as a mix of surrealism and Pop-Art, the outlines are drawn so accurately that, again, I suspect a digital template or stencil. Of course, I am wrong again. This, too, was all drawn by hand. Unbelievable.

I nearly forgot the bronzes, which are also characterised by an interesting mix. The characteristics of form and the figures of the classical period are also clearly visible, which, in combination with the figures from Faust, found their new interpretation.

Apparition, Bronze sculpture, visible in the background on the left, and as a full view on the right

The diversity and perfection of the various artistic positions, their imagery content and ultimately the term Gesamtkunstwerk lead me to pose the final question:

In your press release, the term Gesamtkunstwerk is used, which is considered as being essentially German. It is not possible to translate it into another language. Some of the sound track of The Last Faust is by Wagner. Your Übermensch Humunculus is a black man with blond hair and blue contact lenses. A German literary classic served as a reference to create your Gesamtkunstwerk. All in all, there are stereotypes or terms that have been assigned varying meanings during the course of history. And your narrative ends with the extinction of mankind which mankind, in is greed for infinite knowledge and infinite power created for itself in Silicon Valley. More irony and allusion to yourself is hardly possible…

Humm: [laughs] Correct. That was the intention. Using the concept of time travel through art history in contemporary aesthetics I was able to express how different symbols and also the concept of the Gesamtkunstwerk could be interpreted and defined. I used irony as a stylistic means to stimulate a critical examination when dealing with contemporary history and ultimately with onself….

Would you like to see The Last Faust? Stream video on demand on Amazon, iTunes, Sky Stores, Google, Microsoft, Wuaki or Vubiquity. 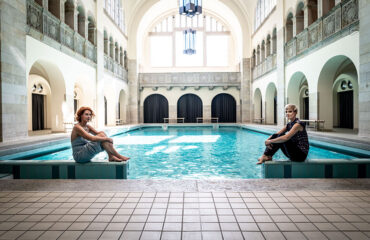