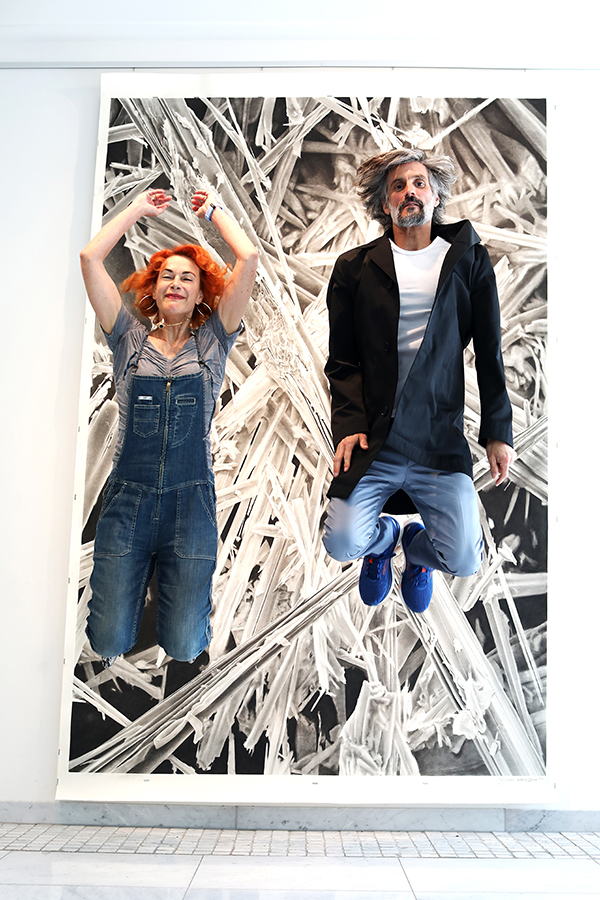 All Jan Glisman really wanted to do was to “just” document a spectacular event in Cologne: The demolition of all three parts of the 138-metre-high Deutsche Welle broadcasting tower, the third-highest building in the city. The funding had been approved, the plans worked out, but then – everything turned out quite differently.

The risk to the broadcasting operations of Deutschlandfunk, which is connected by a common foundation slab, and the spread of asbestos fibres feared by residents in the neighbourhood had prevented the blasting. “Blasting” therefore became “deconstruction”. A process that was to extend over a total of five years and challenged Glisman to document precisely that period. Huge numbers of photos, video material and drawings were initially created without any concrete idea of what was to happen with them.

Jan Glisman (photo above ©Dmitry Zakharov) during the documentation of the deconstruction of Deutsche Welle.

Via the intense scrutinising of and involvement with the material, the information, in the end, changed into artistic works – condensed in an extraordinary, multimedia art project. Topics like time, movement, transience, the victory of a pipsqueak over human megalomania … all this comes alive.

We meet in the exhibition presented by Deutschlandfunk, which is hosted jointly with Kunstverein artrmx e.V. and Deutschlandradio. There are photographs, lenticular prints, sculptural installations created with fragments of the former Deutsche Welle building, and drawings. For the closing event, the Kammermusiksaal is opened up for the first time for an art presentation, and the exhibition with a multimedia installation developed by Jan Glisman in cooperation with the media artist Dmitry Zakharov and the sound artist Jiyun Park, is brought to a close.

In conversation with Jan Glisman. In the background, photographs of the deconstruction of Deutsche Welle.

Besides the sculptures, his precise illustrations of almost analytical meticulousness are typical of Glisman’s work. While looking at the largest of his drawings for this project, I initially thought it was a photograph, or, to be more precise, the photograph of a natural fibre seen through a microscope. But there is something menacing in the structure. Not gentle and organic, but spiky and thorny. “What is it?”

Looking at the pastel drawing of Asbestdisco, detail view on the right.

Glisman: That is a pastel drawing of chrysotile asbestos. The template for this was created in a research centre at the electron microscope in million-fold magnification. I found it exciting to draw the tiny material, invisible to the eye, which had brought down the giant, in a manner befitting its role. This natural material, that – according to its meaning – did justice in an absolutely negative sense. Asbestos is Greek and means that it is imperishable. An absolute symbol of the victory of nature over man.

E.B.: Was it obvious to you from the beginning that this picture would have such symbolic power over everything connected to this project?

Glisman: No. Because, typically, I approach things from a drawing aspect. My background, originally, was in anatomy; I studied medical illustration at the Maastricht Academy of Fine Arts in cooperation with the Medical Faculty. In order to produce scientific infographics, I learnt to look at and analyse objects in detail and to understand them by drawing them. Complex issues become apparent to me only by looking at an object extremely carefully from all angles and probing its inner workings. In addition, as a sculptor, I also explore the material, so in this project these two aspects came together. Ultimately, the artistic presentation through my illustrations in particular revealed to me the danger emanating from asbestos.

Jan Glisman in the studio.

E.B.: And the drawings of the office towers?

Glisman: These are my studies on architecture. The drawing that shows the building from a bird’s eye view in its spatial environment made me aware of its powerful profile within the townscape and thus the town-planning aspects. At the same time, the subject of time emerged. The drawings, created slowly and in detail, in a certain way matched the slow process of the deconstruction, which made the building, that had been planned to have a long future, disappear, super precisely, floor by floor. The perception of the time aspect was reinforced at the later viewing of the photographs created over the entire period.

Looking at the drawings of Hybriskorrektur.

E.B.: Which techniques did you use to create the total number of photographs?

Glisman: Technically, the photographs were created using four action cameras adapted for this purpose. I had installed these, among others, on the 18th floor of this building [next door, Funkhaus Köln, E.B.]. The cameras were programmed to take a picture every 20 minutes. The result was 125.000 pictures. In addition, there is filmed material from more than 200 drone flights.

E.B.: I would not want to imagine sifting through all this. Those are colossal amounts. Did you know from the start what should happen with this artistically?

Glisman: Not at all [laughs]. Initially, it was only about the documentation. I had not expected that the time factor, which often plays such an important part in my works, would also be at the forefront of this project [see Atelierbesuchsbeitrag 10/2017, Link below]. But after I had seen the pictures of the dwindling giant, always from the same perspective, day and night, season after season, I knew immediately that I had to make this temporality visible while observing it. For that, however, I had to find the correct medium. Beside time-lapse films, I chanced on the idea of lenticular printing. Those are pictures which create the impression of movement, frame changes or a 3D effect via minute optical lenses or prisms.

Together, we are looking at the results. When I move, I can see the building successively being deconstructed until it Is no longer there, but also the other way round, as it appears to be built up again. Until now I knew such animation of a two dimensional medium only from small flip image postcards.

Looking at the lenticular prints.

E.B.: It is almost like looking at a sculpture, which can only be perceived through movement in a room.

Glisman: Absolutely. From a sculptural viewpoint too it was therefore important to me to develop something along the lines of an installation. In addition to my comprehensive digital material, I had been able to scavenge ten of the aluminium slabs that clad the building in their thousands. The question arose, how this material could be used in the project. In cooperation with the multimedia artist Dmitry Zakharov and the sound artist Jiyun Park the idea of the multimedia installation arose, which will be shown in the Kammermusiksaal of Deutsche Welle at the closing event. We will use this installation to visually and acoustically resurrect the building which is 50 metres from the construction site.

E.B.: How should I imagine this?

Glisman: Dmitry fed the drone images into 3D software and created a multimedia light sculpture from this data which will float in the room as a gigantic sculpture; Jiyun installed so-called bodyshakers on the aluminium panels. These are systems that cause vibration. As soon as one moves between the panels fastened to the ceiling, the air is made to vibrate which results in the panels causing different sounds. The idea is to also give a voice to the structure floating through the room. Overall, the perception of the entire installation again requires movement in the room.

E.B.: It sounds like a festive conclusion of a truly gargantuan project which addresses many aspects. Do you have any plans about what is next?

Glisman: For a start I am looking forward to my studio. I can’t wait to work with material again that I can shape. [laughs] … 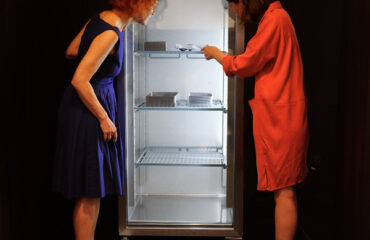 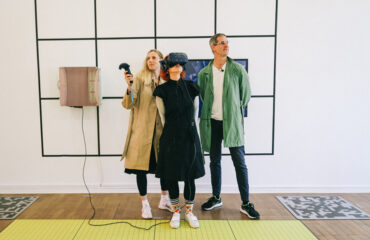 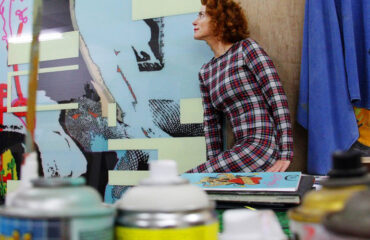