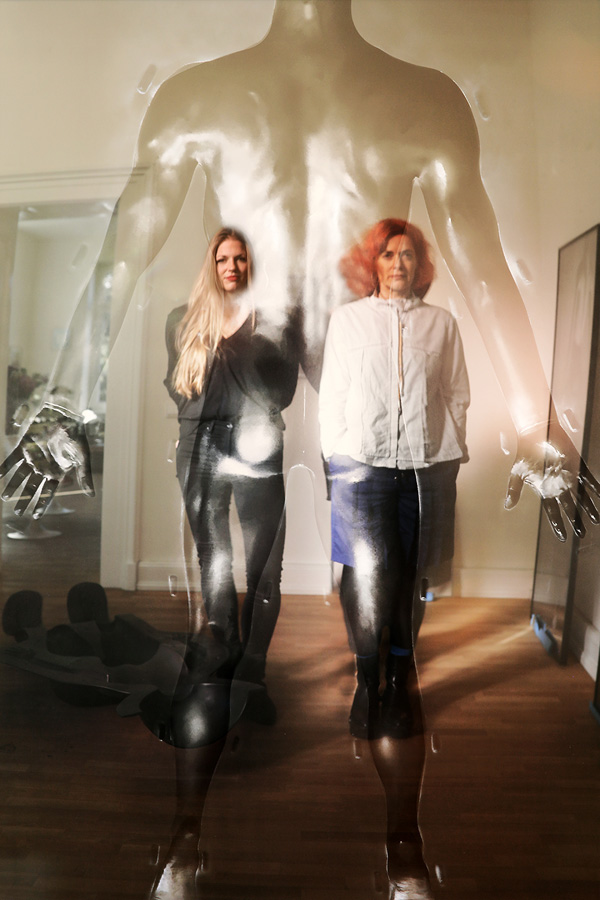 Bonn. Can physical emptiness be filled digitally? How do the interpersonal relationships change in the era of digitalisation? These are questions that occupy Louisa Clement’s mind and have been occupying mine ever since I visited her. I increasingly understand the power of digital communication which currently appears to help us to mainly maintain the contact with the outside world – while the pandemic is raging. “Your Likes made my day “, so popular now, is assuming a worrying undertone…..

I first noticed Clement’s works in the SAD BOT TRUE group exhibition in the Kunst & Denker Galerie Düsseldorf. The clean and futuristic looking aesthetics of her photographs and sculptures had both instantly attracted me magically and caused me to feel somewhat emotionally worried. I want to find out why during our meeting.

We meet in her beautiful “Altbauwohnung” (apartment in a pre-WWII tenement). The beautifully laid coffee table in front of the floor-to-ceiling bookshelf filled chock-a-block with literature emphasises this ambience and invites to some small talk. We chat about her enthusiasm for art, influenced by her family, and her studies.

E.B.: You live directly next to your mother’s gallery [Gisela Clement]. One may assume, therefore, that you had contact with art from an early age?

Clement: Yes, that is correct. My uncle is an architect, my father writes, my mother has had a gallery for the last ten years, and visits of museums and galleries were part of our leisure activities. It was always obvious to me that I would study art.

E.B.: You started studying at the Akademie in Karlsruhe. Why did you change to Andreas Gursky’s class in Düsseldorf?

Clement: In Karlsruhe I attended a class that focussed on painting. During my studies I became aware that painting was not really my thing. Andreas Gursky was more open regarding the choice of medium. In his class, the content and how it could best be visualised, formed the centre. That, ultimately, influenced my approach to the idea of a picture.

E.B.: And this obviously also determined the media diversity in your works. You are all over the place with photography, sculpturing, installations, video and virtual reality. What is amazing is that your own, special visual language, which is somewhat suggestive of science fiction, is always recognizable. Was there a first, central idea on which this characteristic aesthetics was based?

Clement: Perhaps more a central range of topics. While I was still studying, I became very aware of the changes in our communication. And I don’t just mean the fact that it became increasingly digital, but how differently we act in the digital as opposed to the real world. On the one hand, a spontaneous emotionality and openness is displayed via emojis, Likes and comments by complete strangers, but on the other hand, increasingly greater distances are becoming more common during actual physical encounters. Something like second identities emerge particularly on online portals of social media. I found this interplay within the parallel worlds unbelievably interesting and continue to explore it from various perspectives. To get back to the aesthetics. I expect it emerged from having to find an image layer which moves between the physical and the digital world and which, as the end result, might suggest something science-fiction-like.

E.B.: The process for such pictorial invention seems quite demanding to me………..

Clement: It is indeed [laughs]. Each work cycle is preceded by research of up to half a year and gathering endless information, until finally – usually at the point of super-saturation – an idea for a picture emerges in my head.

E.B.: What was the basis for your idea to cast, of all things, AI sex dolls in bronze?

Clement: One of these sculptures is lying next door. Maybe let’s talk about it while looking at it?

We walk into the room next door, which turns out to be a kind of showroom. I don’t know where to look first – paintings from various series: “Heads”, “Gliedermensch”, “Avatars” and “Body” adorn the walls, sculptures the windowsill and said bronze the floor. One can clearly see the body of a female form without a head, from the back, as if cut into half; it is cast into a mould as if in sand. And if that is not bizarre enough, there is a much smaller sculpture on the floor, a little way off. It is the casting mould of the body of a baby …

Clement: [follows my eyes] Yes. I know. Scary. Exploring this, I felt extreme emotional turmoil. Within the context of my questions regarding changes of communication and interaction caused by the technical progress, it was inevitable that I would confront the great topics of man and machine, artificial intelligence and disembodiment in the sense of futuristic theories. It does not take long to come across object fetishism and sex dolls.

Last year, I was in America – the second largest sales market after Asia. In Los Angeles, I heard of people who live with dolls as partners or who carry around with them reborn baby dolls as a child substitute. These people often live at great distances from each other, are totally isolated and hardly have a chance for a personal conversation. Almost like in a permanent lock-down. That gave me the idea for this work. Back in Germany, I made contact with various people living in such circumstances. Their loneliness was palpable.

During Louisa’s explanation I stare, mesmerized, at the sculptures. Now I can see the burden of loneliness in the weight of the bronze, the superficiality and disembodiment in the shell, and the utopia and dystopia of technical progress in the positive-negative casting.

Placed in the immediate proximity of the sculptures are her photographic works from the “Body” series. At first glance, they appear to be like large-scale negatives. Various, almost life-size nudes seen from behind in various postures. A closer look shows that no “real“ people could have posed as models. I ask.

Middle and right: Motives from the series Body (2019)

Clement: That is correct. Once again, the basis for the AI dolls were the moulds, which, in this case, I photographed. By using various digital filters, the body, which can be seen as a blank space in the sculpture, developed a volume in the photograph. A technical interplay, in which my question, whether it is possible to fill physical emptiness digitally, literally formed pictorially.

E.B.: Do you use analogue or digital photography? The pictorial language often reminds me of the classical modernism. A kind of mixture of surrealism and futurism …

Clement: That is inevitable. In my research I fall back on literature and art, that deals with the effects of technical progress on man since the beginning of the industrial revolution. In order to make the contemporary reference, I decided, amongst other things, to use the cell phone rather than the camera for taking photos. The cell phone as part of the mass media of our times has significantly changed our communication. Accordingly, my contents are technically transported by using it.

E.B.: Talking about communication. Here is one of your “Atavar” motifs. Again, the figures appear to be human, but they have been arranged towards each other in diverse ways and appear to be relating to each other. The smooth, brightly coloured surfaces radiate both perfect beauty and artificiality as well as a kind of forlornness. Missing communication?

Motives from the series Avatar (2016)

Clement: More like the question about intimacy in virtual space or the visualization of the question: “How do we relate to each other when we have no space at all.”?

E.B.: As in “Heads“, display mannequins are again the main actors in this series. Why?

Clement: To me, they are an ideal symbol for standardization. In the digital world, in particular, we are dealing more and more with alignment. Individuality gets lost because there is no genuine, external reaction. The anthropomorphic appearance of the display mannequins evokes the idea of the perfect new human being and, at the same time, its artificiality.

E.B.: Talking about artificiality: Is your art not predestined for a VR visit of an exhibition?

Clement: No. That does simply not work for me. During virtual viewing the sensual dimension is missing. Art and humans function in exactly the same way. It needs the live dialogue.

How true! Dialogue is needed, which I am desperately missing while writing this blog. The involvement with the art of Louise Clement causes emotional turmoil. There is not a single topic that does not touch me personally. What is the reality we live in? Is it all of humanity that is changing right now, or is it well on the way to lose itself? To lose itself in the digital world? Questions which need to be discussed – live! And definitely in a real (physical) exchange with others.

Her exhibition diary of 2021 is full. Actually confirmed is her exhibition “Double Bind” at Kunsthalle Gießen (link below). Keep the dates! …#staytuned ,) 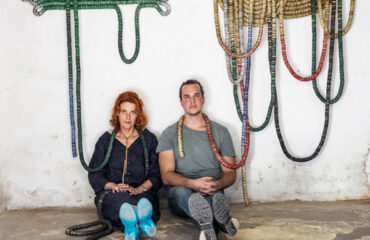 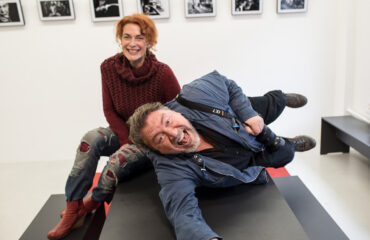 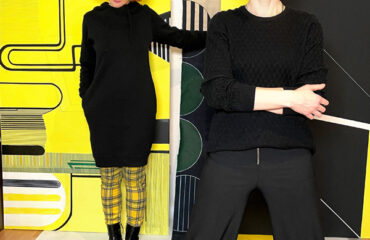 Marlon Red – In pursuit of the undiscovered form